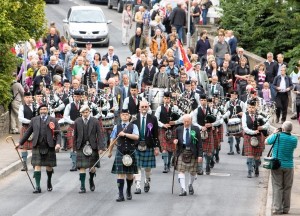 Clan Gunn is one of the oldest and most northerly clans in Scotland, claiming descent from the Norse “Jarls” of Orkney in the tenth century. The name “Gunn” is believed to come from “Gunni”, the grandson of Sweyn Asleifsson, the “Ultimate Viking” hero of the Orkneyinge Saga.

The first Clan Gunn Society was founded in Thurso, Caithness, in 1821 with the title “The Loyal and United Benevolent Society of the Clan Gunn”.

The present Clan Gunn Society was formed in 1960 to “promote a spirit of kinship amongst members of the clan throughout the world”. Now 45 years on we have a membership of over 350 families worldwide.

The Society publishes a colour magazine, the “Gunn Herald”, three times a year, which is posted to members.

Sightseeing trips will be organised so that clansmen and women may visit all the places associated with our Clan’s long history. In addition many fun activities are available to make it a holiday to remember.  See our Generations page for details of our inclusive outlook for all ages.

In the intervening years Mini-Gatherings are held in Caithness timed to coincide with the annual Halkirk Highland Games at the end of July. The St. Donan’s Day Dinner is held each year in April, in a different location each year. The Society also arranges a less formal occasion each year aimed at the younger members and their families.

If you would like to see the society’s constitution then please click here: The Constitution of the Clan Gunn Society